Hans - Joachim Hespos is a german composer, born in 1938, who uses unconventional and extreme techniques to create unusual sounds. 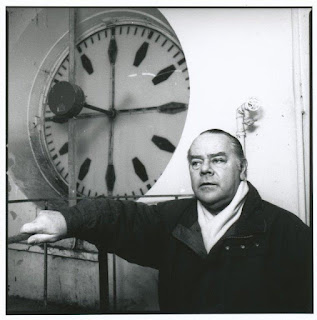 Hespos' scores very frequently employs graphic notation, verbal instructions, traditional music notation or some combination thereof: it always constitute incitements to action rather than instructions to be executed neutrally. Inspired by Adorno and Artaud, each composition forms itself unfettered during the act of composition. Many of his works involve improvisation and don't need any conductor.
This radical subjectivity should communicate itself to any audience of Hespos' work, his aim being, to quote Artaud "To reach a point at which things must burst if there would be a new departure/beginning ... to lead the spirit to a frenzy, to a rising of its energies".

"Hans-Joachim Hespos´s music does not quite dely description, but it raises unexpected questions for the perceiver. Incorporating mime, found objects, exotic and esoteric instruments, dress codes, theatre, implements, graphic and text notation, including instructions that are written in his own language themselves. In one sense, the only approach to take is to dive right in, trying to capture the energy required and hone the details along the way. (...)
Many composers set out to "capture forces" in their music, often volatile and energetic and Hespos is no exception: however, his music also embraces the ambiguous and complex border between life and art, sometimes frantic, and always fascinating."
Mic Spencer - 2015 - program note to the celebration of the music oh Hans-Joachim Hespos in the international concert series at University of Leeds, United Kingdom on 4th december 2015