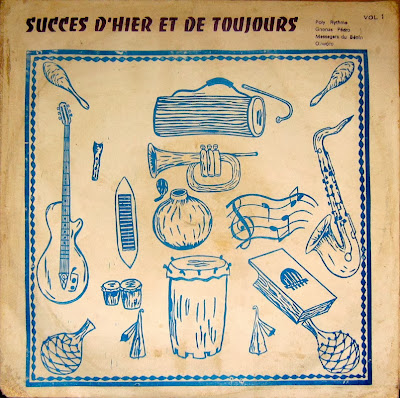 as we are speaking

we did it again 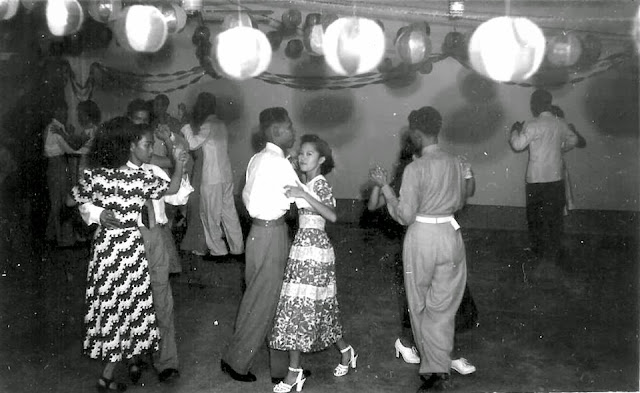 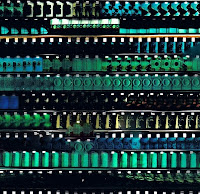 "Pure speculation" is a new LP composed by correspondance in between Alastair Galbraith, David Watson & Jean Jacques Palix.
It started in 2009 with sound material exchanged in between Alastair and Palix which generated short pieces, then joined by David Watson' bagpipes and finally mixed by Palix.
As a "limited edition" of 300 copies, this one one-sided LP , explorating drones' ambiances and melodies, is released by La Station Radar.

"Pure Speculation is a record by three people who live in Paris (France), New York (New York) and Taieri Mouth (New Zealand). They have all met each other, but have never all been in the same place together. This single-sided LP now exists physically, yet the music on it lives up to its rather grandiose name – and does not actually exist in the real world. Watson is an improviser known for his bag-piping, Galbraith an instrument builder and song-writer known for his long-form sound works using little-understood acoustic phenomena and for his very short songs, while Palix is a radiophonic composer and sound designer who composes balletic operas for aerobatic teams. All these things are true but all sound like Munchausen’s wildest lies.

There is no point attempting to describe music that has been composed in three separate parts in the mind of such accomplished fabulists, and then realized as a totality via a form of long-distance ouija-board manipulation. It is a highly-fictional salad of bells, gongs, drones and tones which will stick in your mind long after you have heard it. No one planned it, at least two of the musicians were ignorant of its existence for most of its lifetime, and only a perennial over-reacher such as myself would attempt to justify it in prose. When I first heard Pure Speculation, I thought someone had spiked my drink. Then I realized that the name should be taken perfectly literally. So do your ears a favour and indulge in this rarified form of speculation, it’s unlike much else you’ll hear until the next time you’re going under for major surgery – only this auditory hallucination is one you will remember once you regain consciousness. Drink up – here’s to speculation!"
Bruce Russell - september 2013

***
"One of my favorite thing about Alastair Galbraith’s records is the dichotomy between “noise” and “song” that permeates his discography. Galbraith has always been adept at creating lurching drone-y soundscapes that somehow manage to give way to moments of melodic bliss. Like many of the best noise rockers, Galbraith’s music creates a world where form, melody, and harmony all rely on/emerge from noise/drone. On Galbraith’s collaborative work Pure Speculation with Jean Jacques Palix and David Watson, the composer utilizes his collaborators to create a sprawling 22-minute work that merges several disparate soundworlds into a coherent whole while continuing to explore the dichotomy between noise and melody. This is articulated early in the track, when Palix creates a gloriously rustling palette of sounds that Galbraith uses as the instrumental foundation for a song before giving way to a massive drone anchored by Watson’s signature bagpipe playing. The ebb and flow between each section of this work too is handled masterfully. When the white noise of the piece’s opening field recordings return, it provides the first obvious sign that the trio imperceptibly structured the piece so that certain formal tendencies reoccur and develop into different themes."
Tiny Mix Tape - October 2013.

****
"Stunning three way collaboration that does violence to any notion of ‘collaboration’, with the songs of Alastair Galbraith bisected and book-ended by bagpipe drones, damaged guitar downs and occult Industrial settings: all three artists recorded their contribution separately before knitting the whole deal together into a delirious side-long setting that moves from what sounds like The Albert Ayler Orchestra plays the A Handful Of Dust songbook into occult regions of scrape and drone that could almost be Nurse With Wound before giving way to one of Galbraith’s most magical and heartbreaking songs, with that forlorn edge-of-the-world sound supported by all sorts of drizzy occult spectra. David Watson’s bagpipe work is particularly psychedelic, rising from Faust-scale nod-out rhythms and deep bass tectonics to sound like an orchestra of berserkers marching through the fog while touching on the fantasy scenario of Ayler’s unmade bagpipe orchestra album for Shandar. Jean Jacques Palix specialises in balletic radiophonics and sound design so I’m guessing he’s responsible for the hallucinatory sound works, with slow tectonic eruptions accompanied by distant Morse melodies and the kind of sleight of hand of a Peter Christopherson using noises, radiators, windmill sounds, electric keyboard and computer. This is a stunning set; imagine Rien or Outside The Dream Syndicate as the kind of Industrial/Orchestral context for brokedown NZ singer-songwriter-isms and you’re close to the dazzling reality-warping potential of this singularly potent disc. Edition of only 300 copies, silkscreened sleeves, very highly recommended!"
David Keenan - Volcanic Tongue - november 2013

****
"Constructed by three musicians who live in different parts of the globe and have never been physically present in the same place at the same time, “Pure Speculation” is as much a sound- art installation as a piece of music, each person bringing a different compositional strand to the project creating a 22 minute track that is powerful, emotional and inspiring. Experimental, droning and rich with imagination the track features, electronic sounds (Palix), bells, guitars, voice (Galbraith) and Highland Bagpipes (Watson) each player adding new layers and textures with the Bagpipes having the most impact mainly because it is not a sound that you hear very often in this context, their plaintive drone filling the piece with sound, with Watson skilled enough to be silent when needed, giving the bells and electronics a chance to add scrapes, rattles and chimes to the music. Constantly changing in tone, pace and mood,the music is never still,never dull rewarding the adventurous listener as it seems different every time, the way you hear it dependant on your mood and circumstance as much as the actual composition. Highly recommended, this is my personal favourite out of three excellent releases from a label of high quality."
Simon Lewis - Terrascop Mag - January 2014

"In a sad indictment of some of the bollocks that passes for music these days I’ve just hurled the last three records off the stereo and out of the window (I wish). I’m only sticking with this as I’m a fan of Alastair Galbraith and once the bagpipe has done its thing it gets pretty interesting. Yup, the one long 22 minute piece opens with a bagpipe drone (who needs that?) before a kind of rubbery beat takes charge and Galbraith whispers his distinctive voice atop.
The track is one long improvised piece by the three composers who all live in different parts of earth. It goes through several moods on its way to completion, a nice organic ambient section follows the vocal bit with bouncy shards of synth being layered one upon the other until it all breaks down to rumbles of thunder and a squeaky gate. A highly atmospheric piece which veers from enjoyable sections to lengthy sonic explorations."Norman Records - November 2013 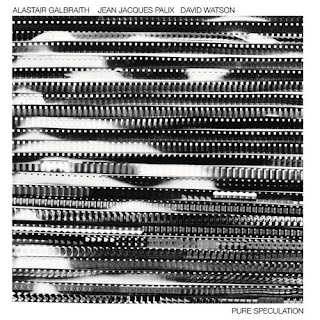 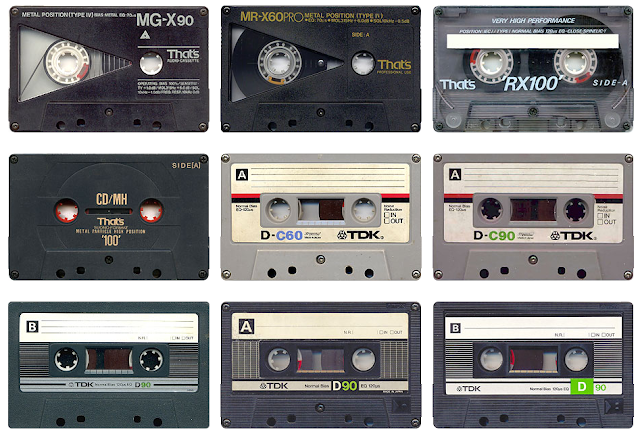 & "Qu'est-ce qu'elle a ma gueule?" (with the voice of the famous "Mouna")
another jingle created by Eve Couturier circa 1984 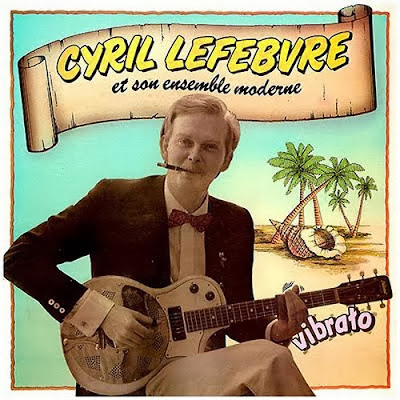 After the re-issued (in CD) of the unavoidable "Cocaïne blues" LP of Cyril Lefebvre originaly issued in 1978, it's time for the "Vibrato" record of Cyril with his Ensemble Moderne in 1979 :  a pure 70s pataphysical and humorous band, and an appearance of the vituoso Harry Hagoussian.
This CD contains some bonus tracks, including amazing live recording with Lol Coxhill, Mike Cooper and Steve Beresford, as well a famous version of "Besame mucho" with Joseph Racaille.

With a 16 pages booklet with rare pictures and a biography by Dominique Grimaud. 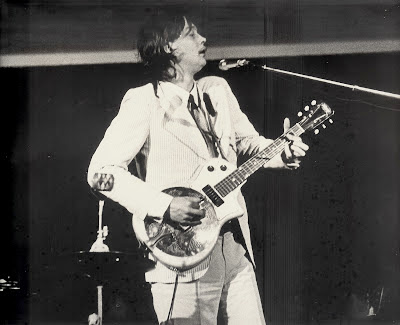 Thanks to Dominique Grimaud & Marcelle Galinari. 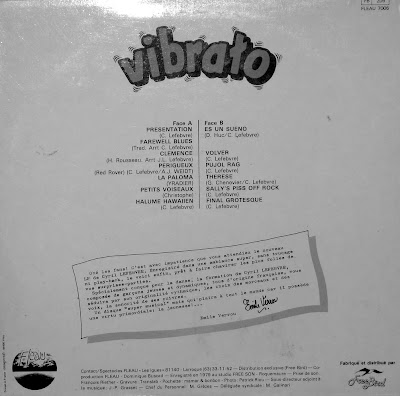