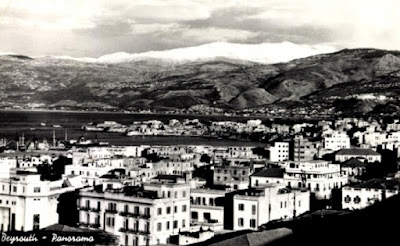 "Bombs of Beirut" is a piece for a string quartet with prerecorded backing vocal tracks and live processing composed by the Armenian-American composer  Mary Kouyoumadjian.

"Lebanon, once the refuge where my grandparents and great-grandparents sought safety from the Armenian Genocide, became the dangerous home my parents and brother were forced to abandon during the Lebanese Civil War (1975-1990). We often read stories and see images in the news about violent events in the Middle East, but we very rarely get to hear the perspective of an individual who lived through them. Inspired by loved ones who grew up during the Lebanese Civil War, it is my hope that Bombs of Beirut provides a sonic picture of what day-to-day life is like in a turbulent Middle East –– not filtered through the news and media, but through the real words of real people. The prerecorded backing track includes interviews with family and friends who shared their various experiences living in a time of war; it also presents sound documentation of bombings and attacks on civilians tape-recorded on an apartment balcony between 1976-1978."
notes from the Mary Kouyoumadjian's official website

In three parts "before the war, the war, after the war", this piece was played by the Kronos Quartet for their 40th anniversary in 2014.