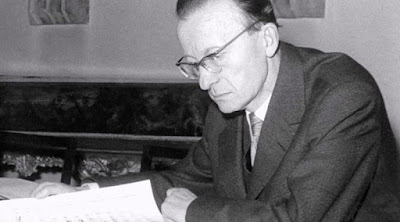 Miloslav Kabeláč (1908 – 1979) is a Czech composer and conductor, belonging to the foremost Czech modern symphonists. New ways of expression and his specific tone-creative principles presentated by Kabeláč above all in his later works. Perspectives opened by him to modern understanding and conception of traditional forms and genres have not yet penetrated our general conscience in a way corresponding to their importance and impact. His opuses content except 8 symphonies further orchestral compositions, organ a piano works, cantatas, choruses and electro-acoustic music (he was also president of Czech society for electro-acoustic music). In the totalitarian period Kabeláč´s work found itself on the periphery of official attention and was performed only sporadically and in a limited choice of compositions.