"For Cornelius" is a piece composed by Alvin Curran in 1981. It was Curran's first release of fully composed music performed by other people, his earlier LPs containing semi-improvised solo electroacoustic works performed by Curran himself.

It was written shortly after the death of Cornelius Cardew in 1981, the great british composer and political firebrand. Curran has some additional notes about the piece at his website: <<<>>>

"For Cornelius" is performed here by Ursula Oppens.

& about Cornelius Cardew these last months: "Scratch Cottage and Nature Study Notes", with Carole Finer and Stefan Szczelkun, original "Scratch Orchestra" members, who did activate an intervention, curated by Pierre Bal-Blanc, as part of the last "Documenta 14" in the basement of the Athens conservatory.
It was an experimental framework for exploring the methodologies, technics, and spirit of the "Scratch Orchestra", originaly founded in July 1969 by Cornelius Cardew, growing out of a series of music composition classes held at Morley College London that were attended by avant-garde musicians as well as artists interested in exploring sound.
This three-day public workshop involving more than 20 students proposed a journey through two important works of the orchestra: Nature Study Notes (1969) and Scratch Cottage (1971). 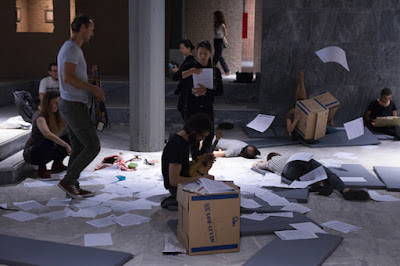