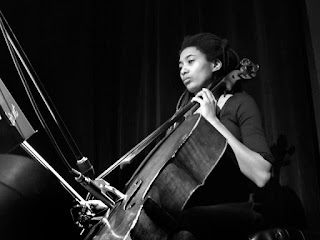 Tomeka Reid  is a Chicago based cellist, composer and educator.
Equally adept in classical and jazz contexts, Tomeka Reid  predominantly finds herself in experimental and improvisatory settings and composes for a wide range of instrumentation, from big band to chamber ensemble. Her music combines her love for groove along with freer concepts.

” (…) I’m loving to perform purely free these days. That used to be such a source of anxiety for me ... to be so naked and create something from nothing in front of people and sometimes with people I’ve never improvised with! (…) Do I solo? Do I become a member of the rhythm section? What can I do to make something happen? (…) I like being pushed and even though I am sometimes stubborn, I like to be forced out of my comfort zone (…) I also enjoy through-composed settings and pieces with structure that include improvisation. It’s nice to know where you’re going sometimes but it’s also really nice to know that if you end up somewhere else that’s ok too! (…)”
Tomeka Reid - 2015 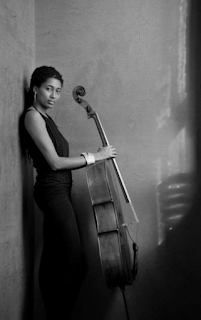 A long interview by Troy Collins to read here

"(...) Chicago-based AACM member Tomeka Reid has honed her improvisational skills for the past decade and a half as a sideperson to such luminaries as Anthony Braxton, George Lewis and Roscoe Mitchell, as well as contemporaries like Dee Alexander, Nicole Mitchell and Mike Reed. She also co-leads Hear in Now, a string trio with New York-based violinist Mazz Swift and Italian bassist Silvia Bolognesi. Reid is poised to become one of the preeminent improvising cellists of her generation with the eponymous release of Tomeka Reid Quartet, her first album as a bandleader (...)"
Troy Collins

& here with the live piece  "Tokens"  at the Hyde Park Jazz Festival in 2015
played by six strings' players and a drummer
Amazing!