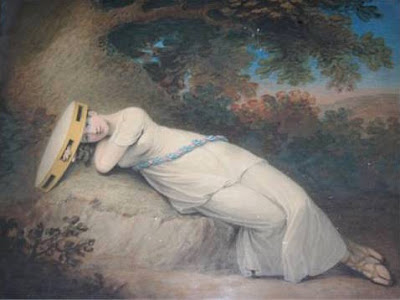 "Fragmentings of Things", originally provoked into being by Adam Buck’s 18th century Irish painting, "Tambourina", of a woman using a large tambourine to shield her head from the sun, is a collaborative work that questions the boundaries of tangibility and voids: a drummer talking about the physicality and communality of his craft; materials falling onto the surface of a drum; the emptiness of the cavity hidden beneath this tactile contact and its resonance and sounding out of darkness, like the body itself whose singing falls on the eardrum, as James Joyce wrote, “into the deeps” to lie quiet as moss as a memory of some temporal placing between the senses close to the life of death.
This film is a highly personal reverie on the physicality and craft of drumming by a percussionist as he beats, taps, scrapes and strokes the different surfaces and materials he explores. Roger Turner has for many years been at the forefront of defining different extremes of percussion, working around the world with musicians and artists.